Due to the widespread success of the framework, LAS has since rid itself of all formal grievance procedures.
Read more!

How the Resolution Framework Works in Action

In our organisations, it’s easy for us to lose sight of people in favour of process. Slipping into those old habits of retribution over restoration has lasting negative impacts on business, collective and individual health. Head of Resolution and Leadership Programmes Stephen Adams discussed how, through a unique triage system, we can build happier, healthier and more harmonious workplaces.

With 30 years of experience working with colleagues in conflict, Steve understands what it means to be human. From his learned experience within the corporate world, moving now to coaching, mediating and training, compassion is his driver.

“There’s two sides of every story so try to walk in other people’s shoes. Whenever anyone’s involved in a disciplinary or grievance procedures, it’s crucial to be mindful that we’re all human beings affected by the same process.”

The time is up for retributive justice. The last two years, experiencing a devastating pandemic, have taught us how the treatment of people is so imperative to wellbeing. From that perspective alone, it’s time for change – and many organisations are stepping into the realm of resolution to provide a less harmful, more empathetic and person-centred approach to colleague connection. It’s all about that human element of the workplace.

By their structure and systems, traditional discipline, grievance and performance procedures perpetuate adversarial, confrontational and combative mindsets. By focusing on litigation to cover up human issues, these processes serve to escalate and entrench problems, generate stress and division, and embed a toxic blame culture.

“Even when people have gone through a grievance procedure or process, 9 times out of 10, they really don’t get what they want at the end. They’ve caused themselves harm for no result.”

It’s not just psychologically damaging. In the UK, the total cost of workplace conflict is £28.5 billion annually. Broken down, that means that:

If we attempt to quantify the emotional expense – that could amount to be a lifetime of hurt, distrust and toxicity for someone involved in a messy tribunal. One can only begin to imagine the cost on livelihood.

It doesn’t have to be this way. As our world progresses, modernises and diversifies, so too should our workplaces. If our businesses are operated by humans, shouldn’t our policies operate for humans?

Authored by David Liddle, and brought to life by Head of Resolution Steve, the Resolution Framework™ births a fresh approach for resolving concerns, conduct, complaints and conflict at work. What’s so different about it?

Here’s how it works on a handy diagram. 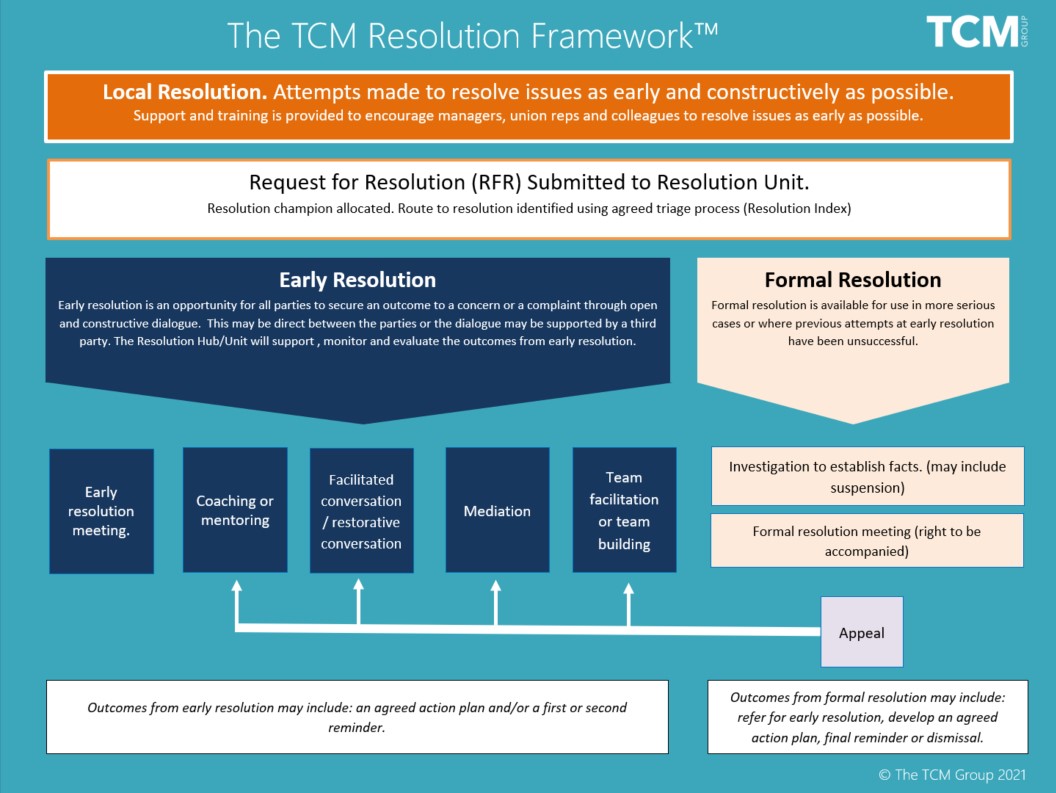 In Steve’s hands-on experience, it takes on average between nine to twelve months to embed the Resolution Framework within a single organisation. Fast forward to years two and three, TCM works closely with colleagues to make sure it’s well and truly integrated. In essence, each case that is identified goes through a triage assessment process. If you have an issue, it’ll be treated with the utmost emotionality, objectivity and compassion.

Each case will be filtered through criteria to determine the best possible (and most appropriate) route to resolution. This includes:

Really, we get that conflict can be super complex, costly and consuming. By building in people before process, we’re pushing organisations to shift from the past to the present, ready for the future. This attitude is what underpins a transformational culture. 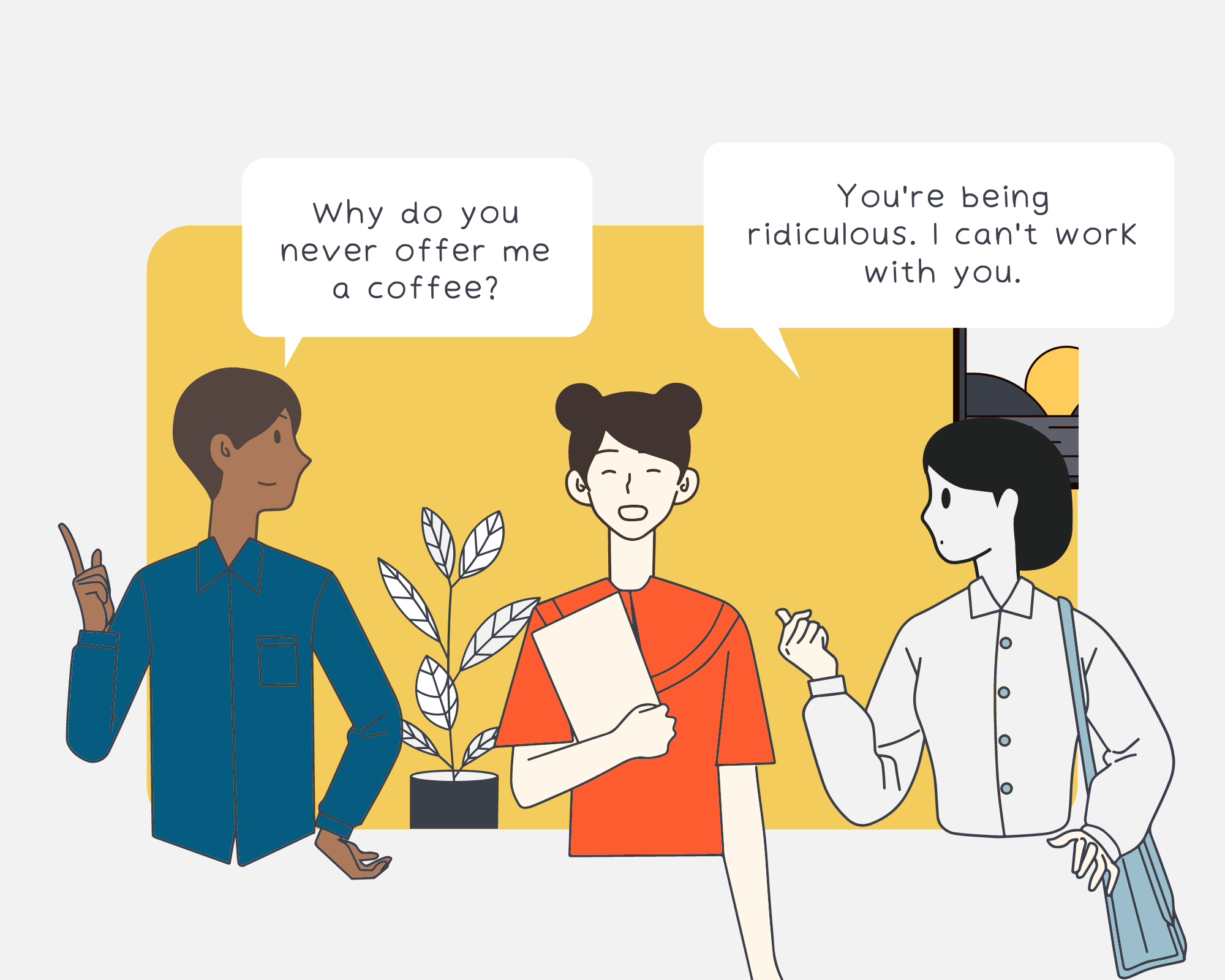 As a consultant, Steve has embedded countless Frameworks within household names. To help bring the Framework alive, he walked us through three scenarios and how they would be assessed, managed and resolved under the Resolution Framework™ process. Don’t get it twisted – formal investigation isn’t banished into the nether realms. For serious cases, it’s absolutely necessary to protect individual and business reputation, wellbeing and longevity. For higher scoring or more complex cases, a formal resolution process remains the essential response.

Crystal and Sheila started working together about two years ago; they both went out for a team night out and Crystal drank too much. Crystal called Sheila a non-team player and hurled abuse at her because she wanted to go home early that night. Sheila stormed off, very upset. To make matters worse, Crystal carried on drinking and sent rude messages on Facebook to Sheila.

After receiving the messages, the next day Sheila was signed off on sick leave for two weeks.

The issue seems to have flared up since they both applied for the centre manager post. Sheila gained the promotion and since then their relationship has been strained.

Sheila would raise a formal complaint against Crystal’s behaviour, and she would be suspended from work, pending an investigation.

The investigation would be carried out and Crystal would very likely be dismissed, based on harassment, bullying and gross misconduct.

Sheila would take on the centre manager post, free from the damage that her relationship with Crystal was causing. A clear example will have been set across the organisation that this kind of behaviour is not acceptable.

In short, there isn’t one. This case would score very highly under the Resolution Triage, triggering a formal investigation, with the same outcomes.

Sam and Fran work with each other at the University. Sam is annoyed that Fran rang one of his students to “see if she was OK”. Fran had overheard a conversation between Sam and the student, where voices were raised. Fran is the new Dean of the University, wanting to change the culture for everyone. Sam felt this was a direct abuse of Fran’s position, and that it therefore comprises bullying.

Sam and Fran’s working relationship since this incident has taken a downward turn, lasting now for four months. Sam claims that Fran is now making detrimental comments in meetings, undermining him. This is in front of other colleagues.

Both parties would be invited to take part in a mediation to see if a suitable resolution could be found. This was promptly scheduled and conducted by a trained mediator from another branch.

The mediation was a success and enabled both Sam and Fran to understand how their different working aspects were impacting their ability to work together. Fran apologised to Sam for not talking to him first before speaking with the student. Sam and Fran agreed to make a conscious effort to create more structure in their working routines to review students’ progress.

Mark and Jackie work in a high-pressure, challenging environment. Jackie is the newest employee and is managed by Mark. For the past six months, they have worked well together, and their department was identified as a source of best practice during a recent review.

However, Mark and Jackie are now involved in a worsening conflict. It began about two weeks ago when Jackie was on the phone to Joanne who was waiting for some information to be emailed to her by Mark. Jackie apparently called Mark “disorganised” and “unprofessional” during the conversation. Jackie likes to work in a well-organised environment and finds the chaotic and unplanned approach at work stressful.

Mark overheard the comments from a distance and accepts that the office can be busy and noisy.

Mark would raise a formal complaint around Jackie’s comments and an investigation would be carried out.

Mark and Jackie’s mental health would plummet, and their relationship would further deteriorate. In this instance, the behaviour is unlikely to be serious enough to warrant disciplinary action, rendering the investigation a complete waste of time, money and resources.

Under the Resolution Framework™, the case would be triaged and recognised as a less severe incident. Mark and Jackie would promptly take part in a facilitated conversation, led by an impartial third party, enabling them both to feel heard, issues resolved, with agreed practical solutions.

It’s all about using positive psychology to really help colleagues think about their issues, get it off their shoulders, and fulfil their lost needs. Everyone gets access to a fair outcome that’s suitable for their situation. It’s the Resolution Framework™ – putting people before process every time.

If you missed the session and you’d like to catch up, you can watch the full recording below:

Taking the Grief out of Grievance

How much is internal conflict costing you?